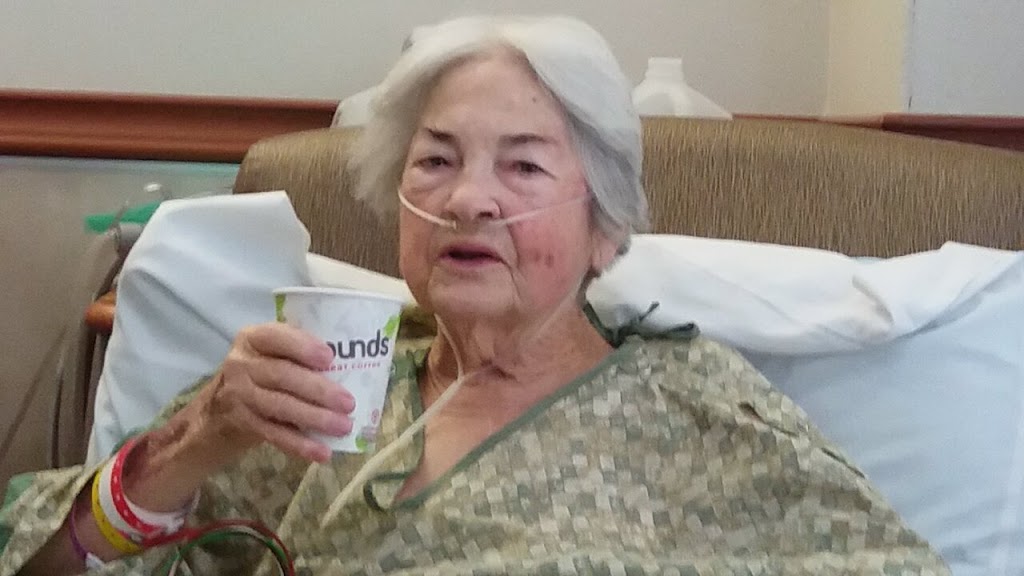 We buried my grandmother in July. The photo above is my last of her before her death. It is poor quality and blurry, but I took it to show family members who needed to know she was feeling better on this particular day.

Those final weeks were spent in the hospital — well over a month of needles and meds and ups and downs. On this day, I happened to be up on the 3rd floor with her, and so my dad, ever her companion, took the chance to stretch his legs. On his return, he brought back coffee for each of us. Meema was so happy about it; nonetheless, I didn’t put this photo in her slide show at the funeral. When someone has suffered a chronic illness like congenital heart disease, you don’t want to show them at their worst.

Now, after over a month, I don’t know if it is her at the worst. Perhaps it is her best. The pain and the discomfort at the end made her so mad, and sometimes not like her usual self, but in this out of focus photo, her hair may be sticking out a bit, but I can see the beginnings of a smile as she laughed at me for taking a picture of such a mundane event. Even so, she relished that cup of joe and told me twice how good it was. She knew how to enjoy the simple things.

The End of History

I fear the day I forget how Meema looked and sounded. I’ll only have photos like these. I am a mix of sadness and gratitude and . . . I don’t know. I think of her at odd moments with a smile and tears caught in my throat. I also don’t think of her at all. The relentless turning of the world alters my grief and my memories and my very ability to remember what I wish.

A death marks the end of a life here on earth, but it also marks the end of a history for those left behind. When someone we love dies, we mourn their loss by wishing to take one more trip with them, to hear one more laugh, to be near them and occupy the same air, just one more time. Memories come unbidden. We see the same colored hair or hear the same sigh, and we think, “Oh, there you are.” Only, they are not there, not the way we want them to be. The history of our beloved has ceased. The stories here on this planet appear to end, a quick and sharp drop off that catches us all wrong and turns us inside out.

To comfort one another, we say, “Oh, they are not suffering anymore. They are with God.” That may be true, but the need to say such things reveals what is hidden, the unsaid, the unmentionable. Death really isn’t okay. Though it is inevitable and comes to us all, it is the ultimate evil. It is what reveals our progress as a sham. It severs, it breaks, it tears asunder. Death is that which makes us all equal, and in a culture ever obsessed with what is fair, it reveals that justice is a cruel master. In being equal, we are condemned all the same, and it is not the equality we imagined it to be.

We live in a time and place in which we spend as much time as possible separated from death. We have a “celebration of life” and remember only the good when those before us had a funeral and grieved, allowing sadness to have its day. We cremate when in generations past we buried, allowing dust to return to dust in the slow cruel passage of time. We turn our gaze away, yet in days of old, men stared into the abyss, contemplating their imminent annihilation, allowing repentance to have its way. We pretend a body is just a shell, thankfully shed at death; conversely, if a body is just a shell, why did Christ die in the body and return with a glorified one marked by His wounds? The seed ceases, but it is a requirement for the life to come and should be held in awe.

The Mystery of Death

Death reveals our separation from life. As life’s opposite, how could it be otherwise? It also reminds us of something more. We are not spirits only; we are flesh and blood and the breath of God and we are capable of being with Him in Paradise this day. A soul without the body is a mystery held in the hand of God. Hallelujah!

For me, the death of my grandmother revealed the sins we all uncover when faced with the end. I took for granted. I assumed, and now I know how little I knew.

It also revealed how horrifyingly and absolutely we have distanced ourselves from the basic facts. Sin is death. God is life. We turn from Him, and we lose this life, succumbing to death, the ultimate absence and negation of all. We have sinned, and we die, and it is a void, a blackness, awaiting the Mystery of Life to come. It is an end to our history that will only be righted at the end of all history.

When Jesus stood at the grave of Lazarus, He wept. Can you imagine? In today’s world, I can hear those around me now, “How can He be sad? He is the Son of God. He’s about to raise his friend from the dead.” Yes, I can hear them because they still condemn me now. In our progress, we dismiss death, but the Gospel is not about a mere putting aside; it is an eradication. We do not minimize it or ignore it, this death that stalks us. No, we face it and embrace it and thereby participate in the greatest vanquishment of the ages. Maybe the Eternal One is beyond our meager “progress.”

Still unanswered for me, how do we account for the tears of Jesus at the tomb of Lazarus? I do not know. Logic eludes me. All I know is to be like Him. I will mourn when death comes even when I know what arrives in the morning. It is only human, after all.