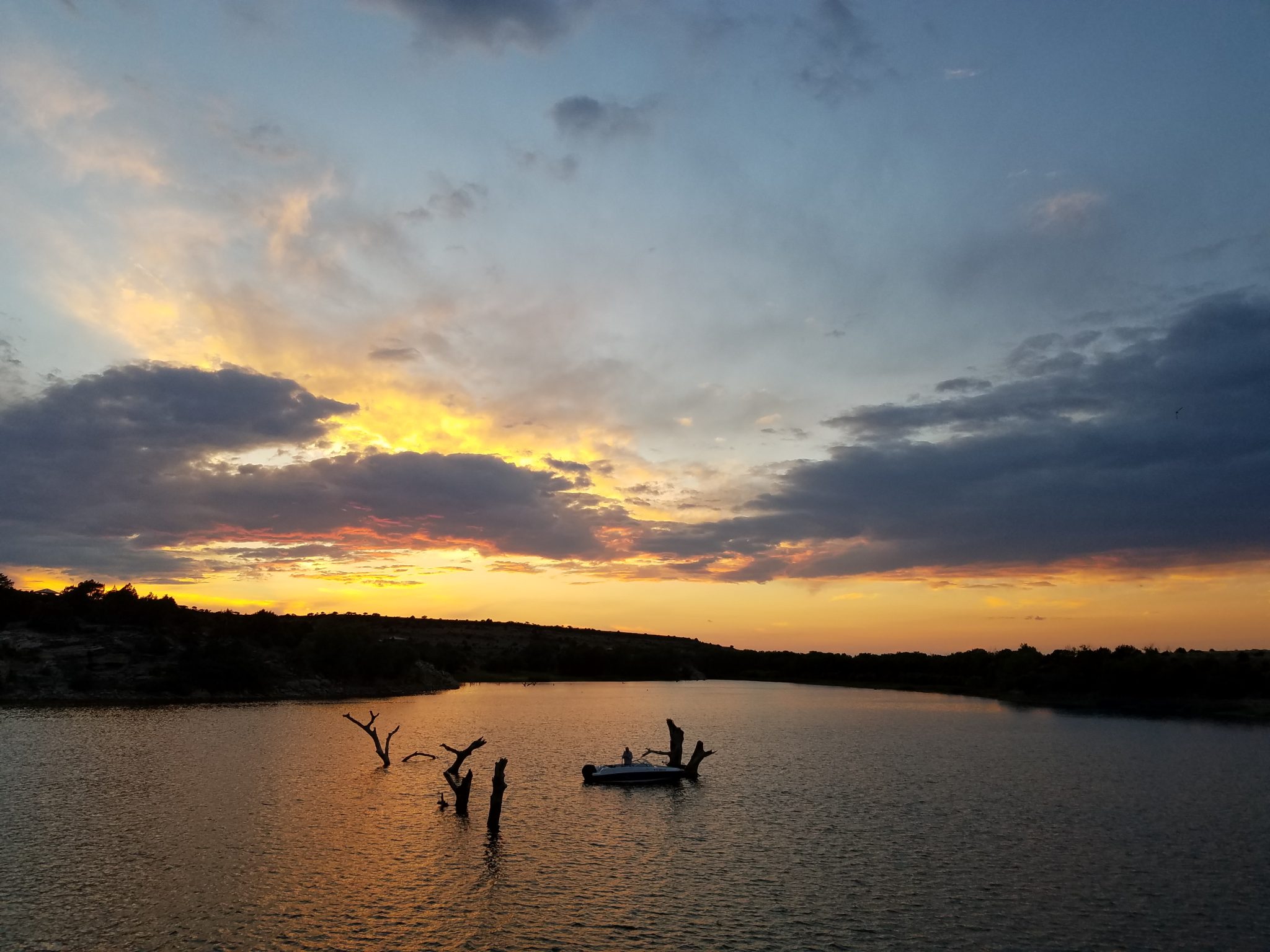 When I was sixteen, the movie A River Runs Through It, hit me like a freight train. I will not deny, a young Brad Pitt might have had something to do with it. However, there was something else about the story, the words of an author coming across the screen that drew me up out of myself, a hard thing to do at the time. When Robert Redford narrated as an elder brother, reflecting on his life, his brother, and his home in Montana, a spark lit in me. It was only an ember, and I did not know what his words would mean to me years later.

“Eventually, all things merge into one, and a river runs through it. The river was cut by the world’s great flood and runs over rocks from the basement of time. On some of the rocks are timeless raindrops. Under the rocks are the words, and some of the words are theirs. I am haunted by waters.” ~ George Maclean

In my own world of Jones County, Texas, I am haunted by another harsh nature all around me. My backyard becomes a wonderland at summer twilight. The cicadas sing, the robins call, and mockingbirds hop across the yard in search of insects. The haunting light from a setting sun bathes the patio and filters into my eyes. It’s a contrast to the day. In the heat of the sun,  the grass is fading yellow from the hundred-plus degree heat, and the damn jujube trees proliferate and make a wreck of yard work as well as a shelter for rattlesnakes. All that is forgotten at dusk, where magic reigns. And, then it is gone.

As predictable as death and taxes, the magic ends. It becomes too dark to read, and I switch the patio light on. And then I read, pretending I’m not just waiting for the next golden hour.

The in-between of summer

Even the season of summer itself enchants. As a teacher, I love my students, but unbeknownst to them, I long for the break from school. It is the time in between classes when I reflect on what came before now and anticipate what will be the next year. When I sit in the midst of the long break, I know I am at that magical time. I hate classroom management and leadership roles and the crazed busyness of the school year. When I lounge on summer days, I marvel at the feel of it all and the peace.

The long break ends every year, and it’s like telling a first-time pregnant woman about the long nights and the feedings and the diapers. She cannot imagine how shocking it will be and that it has to happen. The anticipation of the little bundle-to-be cannot prepare you for the pain of the realities to come. You like to tell yourself that you could never hate the way the primal needs of a child and that the endless work of it all ravages your whole being. It never seems like you could hate it, but you do. And, it is always a surprise. The time of anticipation fades, and the dark takes over.

The times in-between the day and the night torment me. My life is full of golden hours and yet there are never enough of these times of which I clutch onto with all my might, only to have them fade away. Even the thirty-minute drive to work, a time that becomes a place filled with crops and fields and mesquites, even that ends. On those drives, the sun plays havoc with the light and brings my soul to a standstill as if it embodies what I cannot say about the transition from my private self to my public work face.  Leaving behind my quiet time shuts the door on that time in-between, and the whole day I wait for dusk once again. Then, I can finally stand in between again and stop and breathe.

No one around me is immune to these times in-between. My boys are at the golden hour, the ending of childhood where I see glimpses of men. I wonder at them, and I find myself charmed by the way little boys tease their moms and still give random hugs without being asked. I relish this time and wonder again about the days ahead when they will become little men. Fear strikes at my heart when I notice a hint of the hormones and bravado and charm they merely skirt around now. At some point, it will be theirs faster than I can be prepared even knowing it is inevitable.

I do not understand men, and I wonder if these almost men will also become an enigma to me. So, I bask in this time of in-between, a time when a boy loves a woman without demands or expectations. It will end, and I wonder what in-betweens will lie beyond that.

Even death becomes a golden hour

On the evening before my grandfather’s funeral, it was a humid and hot day, a day we near Southerners call sultry. I stood outside on my parents’ driveway and listened as the B1-Bs roared through the sky. Knowing he was gone and my grandmother with him, I lurked in the time in-between my vivid memories and the slow ache of forgetfulness. Slowly, I could feel my human fragility take over. For now, I remember the curves and arches of their faces and hear their voices. Soon that too will be gone, so I linger at this golden hour between the life of my youth and the years far away. A day will come when I can’t remember what they look like as they laugh. Indeed, the moment of death is a golden hour, a time before memories fade and the pain becomes worse than raw.

Beyond the now and the beyond

I enter into what I hope is the second half of my life. It is like a golden hour, a time when I am no longer blindly young and naive. I now know the ravages of pain and death. I walk on knowing it is but an in-between time, between the now and the beyond.

When I was young, I was stupid. It is not an uncommon combination. Trust me, I teach freshmen. At the time of my youth, and if we’re honest even now, I wanted a husband and a house full of children, and I had no idea how that would ever come to be. I did not, nor do I now,  fit easily into the mold which would bring about such an outcome. During one particularly idiotic time of hunger thwarted, I sat with tears streaming in my parents’ yard and looked at the stars, and I asked God what the hell was wrong with me. Yes, I grant it was a brazen moment on all accounts. I knew nothing of the perfect hour; my sight was dim, clouded by contradictory waves of innocence and lust and a deep selfishness.

I think, no – I know I missed the golden hour sitting right in my face. If I could go back, I’d slap that teenage girl first. She needed it. Then, I’d smile, and I wouldn’t reveal anything about what was to come. There would be no point. Instead, I’d hold her hand and plead with her to wait there in the cool grass and watch as the sun slowly rose and turned the world pink and orange. A golden hour is not to be missed. It hurts like hell, but it is damn worth it.

One thought on “The Golden Hour”